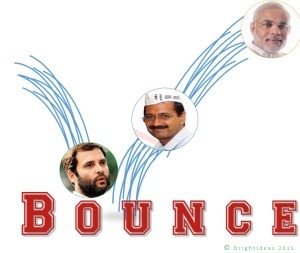 A Brand View Story is back after a rather long break! Well it was a break at first then a stubborn case of writers block.  What better a way to get past the block than writing about your muse?  Yes, it’s that time again, the elections in Delhi are round the corner…again! Politics as I have mentioned before, can teach us marketers a thing or two.

What goes up must come down they say.  The corollary being it shall bounce back up again.  Now think of the same concept keeping brands in mind.  We all would be able to name a few brands that soared high and dipped into anonymity. We might struggle to come up with those that bounced back.  The few that did are case studies in themselves giving us lessons in re-invention, getting back to the basics etcetera.  At this juncture I would like to draw a line between brands that faded away and those that actually dipped or dropped in popularity, a sharper slope so to speak.

I have on previous occasions used the example of the AAP (Aam Aadmi Party).  Brand AAP’s mercurial debut in the assembly elections in Delhi 2013, their here now and gone in a blink government in Feb 2014 and their poor (arguably) showing in the subsequent parliamentary elections in April-May 2014 has been discussed threadbare.  The brand is attempting a comeback with the assembly elections scheduled for Feb 2015.

To add to the several other theories around brands making a comeback here’s A Brand View Story’s Theory of Bounce.  Brands that are on their way down or trying to “bounce” back after going down have according to yours truly the following strategic choices:

The elections in Delhi give us an opportunity of putting the choices made by the parties contesting the elections. They are all at different stages of the curve as far as bounce is concerned. All are brands that fell steeply i.e. the BJP in the 2004 elections, are falling steeply i.e. the INC or fell and are on the bounce i.e. AAP. The INC is perhaps is at its ebb, AAP attempting to gain on the bounce whilst the BJP is at the top of the bounce. Now for the strategic choices.  The INC seems to be reconciled to its fate after a string of reverses.   The AAP on the other hand seems to have opted for a retry with little repair.  The BJP did a complete rejig if not reinvented itself when it opted to go with the leadership of Modi-Shah combine ahead of the national elections.

What remains to be seen is how these choices pay off.  While one has an obvious outcome, for the others we need to wait for February 9th 2015!

Join 546 other followers
Follow A Brand View Story on WordPress.com