A promise to my readers and to myself, this will be last of my posts that have a reference to AAP (Aam Aadmi Party). I shall be honest here, the poll results and AAPs performance in the Delhi Elections was certainly mind blowing.

The biggest message that I drew out of the results was “It is indeed OK to make a mistake” the Ryder being “You must have learnt from it”.

Not many of us, yours truly included forgive mistakes that easy. The school of thought being “You got your chance, you blew it too bad! Now get back at the end of the line!!” It means that chances are not supposed to come easy. Doesn’t necessarily mean that you don’t have the required capability or talent to do what was expected; it means you need to prove yourself again. The thought itself perhaps is something that is inherited as a legacy of growing up in an environment where the have nots far exceed the haves. While few are born into the haves, the others have to rise up through the heap of potential “havers”.

So what is it that AAP really did?

The pollsters will analyse the stats to death but here is the ABVS take. Yours truly believes what AAP really did is read the situation and understand their payoffs well. With the all-round decimation of the Congress, Delhi was slated to be a head on fight between AAP and the BJP. The background to the elections being the resounding win of the BJP in the national and state elections leading upto the Delhi elections and the AAPs poor showing in the National Elections.

Now for the strategic choices each had and a normal understanding of the payoffs assuming that both parties were pursuing self-interest (err why assume they are a bunch of politicians aren’t they?) and were aware of the choices the other was making. 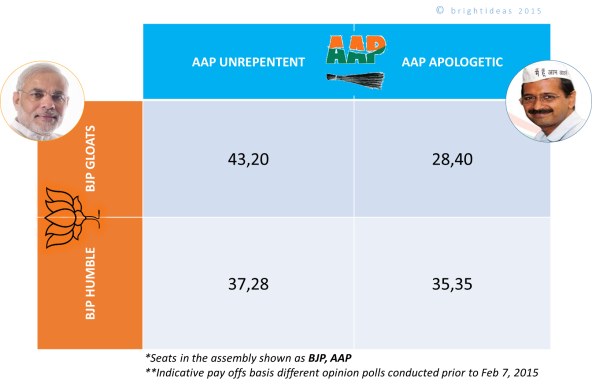 The mathematics of Delhi’s 2013 result had almost ensured there would be a re-election. The media houses and research agencies kept their game up with the opinion polls in the run up. Most giving the BJP the edge in a tough fight.

The AAP really had the choice of being unrepentant and continuing their sting and dharna brand of politics or be apologetic about the 49 day fiasco and underline their passion for bringing a different narrative to the political context.

The BJP had the choice of being belligerent following all the electoral success under M/S Modi & Shah or to stay with the development for all plank they had chosen during the national elections. They chose the former and said “What India Wants, Delhi Wants”.

If one were to summarise the various opinion polls the payoff’s going into the Delhi elections in 2015 were as in the payoff matrix above.

To be fair to BJP, given the payoffs they went for maximum. They started off with an advantage that they hoped to maximize on. However, contrary to their expectations as the BJP upped its belligerence the tide started turning the AAP way.  While BJP estimated and assessed their own and their key opponents strength, they underestimated how weak Congress had become. Strange given their vision of an India sans Congress or as the BJP says it “Congress mukt Bharat”.

The AAP on the other hand remained true to their we got it wrong the first time around but trust us we have a plan to get it right this time pitch as they neared the election. Eventually resulting in a landslide verdict in their favour, a whopping 67 seats in a 70 seat assembly. The reward for being earnest!

Join 546 other subscribers
Follow A Brand View Story on WordPress.com