Great teams are teams that perform…consistently. But are great teams just a matter of chance? Is there a way or a method of selecting these teams? What are the traits good team players display or possess?

While the cliché says there’s no “I” in “TEAM” the fact is that all teams are but a collection of “I”s.

For teams to succeed and succeed time and again it is important to get the “right mix” of people in the team. A good team would consist 7 personality profiles. It is possible though that an individual displays traits that are suited for more than one kind of profile more so, in case of small teams. 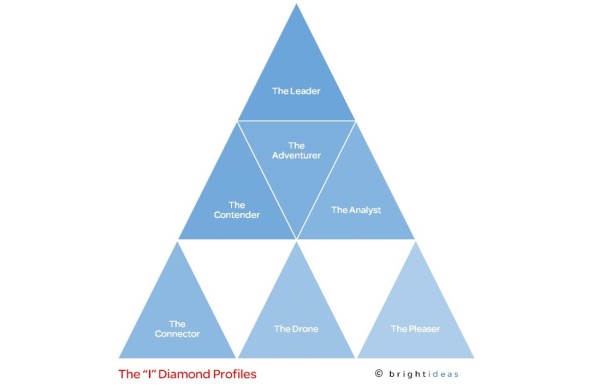 While the leader has to be one and undisputed, the number of the other profiles tends to vary with team size. Refer pyramid. What teams need most in terms of numbers are Drones, Connectors and Pleasers in decreasing order.

Now that we have talked about the different profiles, let’s get a sense of the traits with what yours truly calls the “I-Diamond”.

The I Diamond indicates 6 Dimensions or Parameters on/around which individuals would need to be assessed. This of course is a subjective assessment based on experience. Nonetheless an understanding or evaluation of potential team members basis the I Diamond can help put together the “right” team.

The dimensions, 6 in number may be put in two broad buckets – Intrinsic and Extrinsic. All of them have varying levels of manifestation say on a scale of 1 to 5 from extremely low to extremely high.

Are these exhaustive? By no means. Are they requisite traits for team activities and participation? Definitely!

Let’s take a look at the profiles and how their spider web would look like. Basic premise , extremities are as impossible as the odds of the entire Justice League rolled into an individual or for that matter Lloyd Christmas and Harry Dunne of Dumb and Dumber becoming one person. 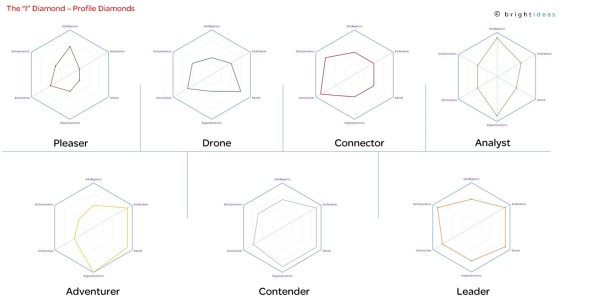 The Pleaser’s diamond leans heavily towards the extrinsic side. They are moderate to high on intelligence,however they tend to be low-moderate on the other intrinsic parameters i.e Inclination and Intent. Their skills lie in the interaction and inclusiveness areas that too, moderate. Net-net lazy enough to do what they are told or smart enough to never to fall out of line.

The Connector also has a dominant extrinsic side moderate to high on interaction and inclusiveness.

The Drone is the hard worker. Not as intelligent as the Pleaser but higher on intent. Their diamond is heavy around the middle and balanced on both intrinsic and extrinsic.

The Analyst is the traditional diamond taller at the ends and leaner around the middle high on intelligence and inquisitiveness.

The Adventures are low on interaction and interaction. The are lone wolves who are curious and determined as indicated by their heavy intrinsic leaning.

The Contender and the Leader are essentially birds of a feather. Their diamonds are similar save the higher level of inclusiveness that the leader displays.

Sports is fertile ground for examples for theories based on teams and leadership. So this time not going to bore you with an example.
However I will urge you to pick a team of your liking-one that you think has delivered consistently and super-impose these traits on the obvious ones i.e. leaders, the contenders and the drones.