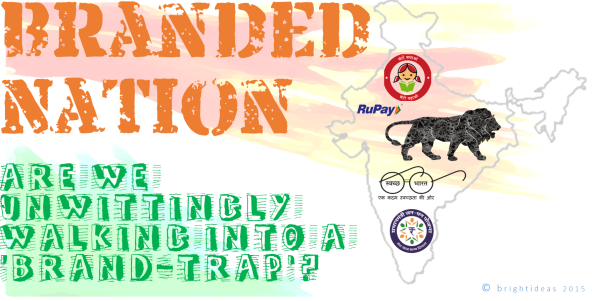 In the aftermath of the 2014 elections, the Congress kept mentioning that it got blown away by BJP’s marketing blitzkrieg. It should not have come as a surprise to the Congress party though, since the direction of BJP’s strategic thinking was more or less set during A.B. Vajpayee’s tenure as the PM.

The failure of the India shining campaign made the Congress complacent and the BJP resilient. During the ten years they were away from power the BJP practiced and perfected the craft. Finally mounting the attack with its most potent weapon! The sustained digital presence that started with veteran leader L.K. Advani, the share of mind/conversation and something all marketers swear by – on-ground connect; all proved to be gold.

No doubt it has worked for BJP the political party and catapulted it into government. The think-tank reckons it might just work for the government as well.

A marked change from earlier has been the ‘Go to Market’. Each one of the initiatives has been supported with a well thought communication plan and activations. Whether it is the Swatch Bharat Abhiyan, the Make in India or the Pradhan Mantri Jan Dhan Yojna every element that could have been branded has been. There has also been a flurry of war cries, rallying cries and punch lines such “Minimum Government and Maximum Governance”, “No Red Tape, Only Red Carpet” etc.

The government needs to tread carefully in order not to fall into its own ‘Brand-trap’.

India as a nation has traditionally been a reluctant marketer and this new aggressive approach has been and should be accorded a cautious welcome both from within and from outside the country. After all, if one of the world’s largest markets has to get its rightful share of the investment pie the helmsmen need to do whatever it takes to catch the world’s eye. Having said that, as with any other product or service the product experience has to back the claim.

All marketing has an element of hyperbole in it. It is for the marketers to ensure that the product lives up to the promises that are made. Regardless of who and where ‘dissonance’ is a concept that all marketers need to be wary of. Few would disagree that in the current context brands, though created by marketers are ‘co-managed’ by the consumers. Therefore, while it is good to see the slick marketing plans for initiatives, it is also important to ensure that the surrounding ‘buzz’ and the ‘conversations’ about need to be managed better and need to have a positive ‘slant’.

As someone once said “A hen lays an egg and cackles, the catfish lays a million without making a sound. We all know whose eggs we eat!”

END_OF_DOCUMENT_TOKEN_TO_BE_REPLACED

The thing with icons and heroes who are put on a pedestal is the inevitability of a fall.  Regardless of whether it’s inflicted by fate or brought upon by one’s own deeds it is bound to hurt bad.

There have been Gigabytes of rants in the sociosphere describing how unpleasant the experience was and how suddenly this much loved, revered, more importantly relied upon shopping portal had metamorphosed into a “con” job.  Flopkart, Foolkart the brand was getting shot down thick and fast.

Pun apart, the flip side to the story is the fact that over a million (1.5 as per Flipkart’s apology mail) of netizens descended on the site to get their hands on something or anything. Even for a nation that sinks its teeth into the “Yours for Rupee One” formula time and time again the sheer magnitude was a surprise.

The question is if at all any blame needs to be laid on their door?  Haven’t there been times when we have turned back from a favourite joint just because it was too crowded or been served bad food or experienced atrocious service? Let’s face it s&^t happens!

I am not passing judgement on Flipkart’s innocence here. No one disputes the fact that the portal could have been better prepared. Last I checked, getting a deal is not anyone’s right. Neither is a communication indicating potential discounts/deals a contract. The point I am trying to make is how can greed be good for one (a customer desirous of a discount) and not the other (a seller aggressively pushing his wares).

Be that as it may, the Flipkart incident is a sign of times and those to come.  It’s an emphatic confirmation of the hockey stick trajectory that e-commerce in India is on. A justification perhaps for the billions of dollars of investor faith.

The top shopping portals are battling it out this festival season in a war reminiscent of the cola wars or the detergent wars. The media houses are raking in the chips. The newspapers are full of gate-folds double spreads, jackets whatever kind of innovation they can offer.  Do not have the numbers but would stick my neck out for online guys to have the highest share of voice as compared to any other category.

The white good brands that typically used to surface at this time of the year are seeing their thunder being stolen. It’s a double edged sword for them. On one side the online channel is boosting revenues. On the other, they are holding their breath fearing how the online deals and prices are going to impact their market operating prices, praying it does not give rise to conflict.

While people click and shop away this festive season the online shopping dhamaka’s have given a new hope to all the brands that they host. After two or three failed seasons of the promised festival spike there’s hope of deliverance! 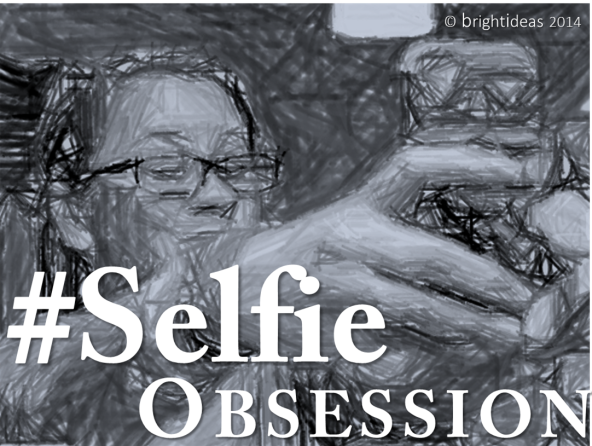 If you are a marketer who has clicked to read about this, chances are, you are as much as at a loss of understanding as I am with this selfie business.  Or, if I were to play with words, the disconnect between selfie and business.

Yes, “buzz” and “talkability” are mandates for any brand that exists in the sociosphere.  But in my book they can be considered lead indicators of a brands virulence.  The real measures have and should according to yours truly always remain in the business realm.

Selfies seem to be the newest big thing on the internet these days or to put it in real terms calling it one is. The rapid proliferation of social networking if nothing else, has given tremendous fillip to the narcissistic instincts of the digital natives.  If one were to observe carefully most us have started leading these digital alter-lives and as much as we hate to admit it are pre-occupied with them. Point is, people have been taking self-pics ever since they put cameras on mobile phones and for as long as social networking sites have been around.  The proof lies in the fact that with over 4billion taking pictures with their mobile phones, Nokia has perhaps sold more digital cameras by a factor of A VERY BIG NUMBER than the nearest camera maker and that Facebook carries more pictures than the Picasa’s of the world.

So what started as an alleged faux pas with the Obama selfie has snowballed into an acceptable behaviour over a short span of a few months with the Ellen DeGeneres selfie at the Oscars. So much so that we now have marketing campaigns built on selfies. A departure from an era not so long ago where this would have been the digital activation angle for a larger thought.

The concept of #Selfie is inherently linked to cosmetic brands and as mentioned earlier several brands decided to ride the selfie trend and as usual some have it together some sadly don’t.  As marketers we tend to get swayed and tempted by latest trends. Under the guise of innovation we flirt with these trends with or without a defined purpose. The flavour the past couple of seasons were flash mobs countless brands spent millions of dollars behind these trends.  Someone somewhere must pause to think whether having a new angle on the whole thing is sufficient to press the go button.

Here’s a compendium of campaigns that I came across. Do take a look and judge for yourselves which ones actually helped the brand grow and which ones were “Oh! We did that too”.

Till such time that we find a new craze the #Selfie Obsession continues.

As I write this post, the IPL 7 auctions are underway. The PR machinery of the franchise is working overtime to get people enthused and excited. From conversations around which player in which franchise to new kids on the block the twitter universe is abuzz.

There is no denying the fact that IPL perhaps has been one of the most popular leagues anywhere in the world. Cricketers of all cricket playing nations with or without test status would give an arm and leg to feature in the league and earn themselves a contract. A lot has been written about how the younger lot of cricketers yearn a chance to play the IPL over donning the national cap!

Someone once said that any publicity is good publicity. Brand IPL seems to live, breathe and propagate this credo. Seldom has a brand been so synonymous with controversies. One might opine that controversy is a design element of the product that IPL is.

What is surprising is that even aspersions on the quality of the core product viz T20 cricket have not come in the way. From match fixing to betting, physical assaults to sexual assaults the IPL seasons have witnessed a range of controversies.

Good or bad, right or wrong.  Let’s face it IPL is a commercial enterprise.   A vehicle for other brands to be seen and heard. The designed for Television IPL has seen a declining trend over the past 6 seasons as far its TV ratings are concerned, they are none the less significant.  The season six had almost Rs.800Crs riding on it as advertising revenues. That seems to be brand IPL’s reason for chugging along as well. It is for all practical purposes the Super Bowl equivalent of India. Brands plan for their IPL related spends and campaigns much in advance.  Those who are not associated or cannot afford the IPL keep their plans ready for reaching consumers outside of the IPL juggernaut during the 45 day spectacle.

A recent report put IPLs brand value in excess of $3Bn with a combined brand valuation of the franchises at over $400Mn. With the depleting central pool and the allied sponsorship/merchandising revenues, the question mark over the franchisees making money however continues. The brand valuations of the individual franchises seems to be the redeeming factor for the investors at the moment.

IPL 6 despite the fixing controversy still beamed into a whopping 129Mn households in India. Might perhaps is right. The might of brand IPL seems to be in its popularity or the numbers. Maybe Indians are so used to the typical masala pot-boiler entertainment format that they have made an allowance for all the negatives in the IPL format.

I guess the Indian consumer is an innocent forgiving lot. More often than not, they judge you for who you are and not who you are seen or associated with. That’s our culture perhaps, our mythology treats a Karna and Vibhishana with respect despite their association with evil.

We are accepting of the multiple shades of grey.

Meanwhile, IPL the brand and the brands that ride on it march on stubbornly into Season 7.